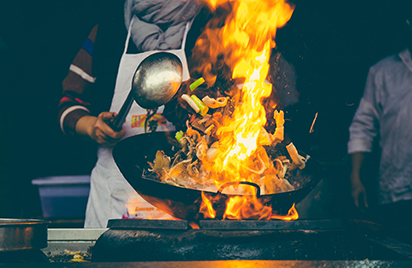 Chinese cooking has over thousands of years history; It was influenced by different historical events in Great China area in the past 3000 years. The silk road between China and the West in Tang and Han Dynasty brings in silverware and spices, which significantly impacted the Xinjiang Ugar Cuisine. It always has a hint of Arabic cuisine to some non-Chinese people. In the Song and Yuan Dynasty, Chinese cooking was greatly influenced by the Mongolians, hence a lot of the Chinese Northern cuisines like Inner Mongolian cuisine are very similar to Mongolians. In the age of discovery, a lot of exotic food materials arrive in China, which significantly impacts people’s food culture.

Chinese people have a strict rule when it comes to material selections. Chinese believe that every dish from the look, smell, taste, meaning, shape, and healthy is a complete experience. A perfect recipe must have this six-component to stand out from the rest.

Color: Some food materials are for decoration. Chinese people use fresh Flowers, Colorful vegetables, food carvings, and extra. It is a method to increase its look and grab people’s attention and appetite before enjoying the dish.

Aroma: The aromatic smell of a dish can attract people’s smell sense, stimulate their brain to carve for the plate. The aroma is a critical factor of how much attention you will get the dish.

Flavor: Raw Material selection can significantly impact the flavor intense level of your dish. For example, the shrimp roe will dramatically increase the flavor of dumplings.

Meaning: The name and shape of a raw could bear meanings of a dish. In old times, scholars will eat red carps before final exams because Red Carps always try to “jump” over dams to find larger habitat.

Arrangement: Food arrangement in a dish is also very careful and cautious; color matching food needs to placed together in sequence and orders.

Health: Some food materials have a high nutritious value, and some have medical usage. Garlic and Ginger are now have proven to have antioxidant and inflammation properties.

Chinese cooks and chefs use varies types of traditional cooking methods to achieve the six-component of the perfect dish mentioned above.

Oil Heating: Use oil as the heating medium to transfer heat into the food.

Water Heating: Use Water as the heating medium to conduct heat to cook the food.

Steam Heating: Use hot water/soup stream to heat up the food.

The most frequently used method is stir-frying. This method cooks processed ingredients at high heat for a short period of time. Edible oil is used as the heat conductor. Usually, works are for high heat cooking, edible oil is added followed by ingredients and seasonings. Due to the short period of time involved in the process, ingredients largely keep their nutritional value. Stir-fried meat is typically juicy and tasty, and vegetables are usually tender and crispy.

Deep-frying uses much more edible oil than stir-frying (the ingredient should be fully submerged in the oil), producing crisp-textured food. The common method of preparing deep-frying dishes is to cut the ingredients into medium-sized pieces or chunks, soak them in prepared seasoning for a while, coat with cornstarch (optional), and finally fry in hot deep oil over medium heat. The density of the coating will determine the levels of crispness and tenderness on the inside and outside of the ingredients used.

As the name implies, shallow-frying is a cooking method using less edible oil than deep-frying and lower heat than stir-frying. Shallow-fried dishes are usually rather tender inside, appearing golden or slightly burnt outside. The ingredients for shallow-frying are usually cut into slices or flat pieces and rubbed with seasonings. To make the outer skin crispy, the ingredients are also lightly coated with cornstarch after being seasoned. When cooking, the ingredients should be shallow-fried on one side first and then turned to the other.

To cook large-sized ingredients melt-in-your-mouth, braising is to add ingredients and seasonings in a wok or a saucepan at the same time, add in some water, boil it and then simmer it for one hour or more. The ingredients are usually cut into cubes or diamonds. To cook dishes by braising, the ingredients especially the animal ingredients should be get rid of the fishy smell in boiling water and rinsed in clean water first, and the sauce is thickened either with cornstarch or reduced by simmering finally.

Boiling could be considered the simplest among all the Chinese cooking methods. It simply involves placing food in boiling water. It is mainly used for cooking small-sized and soft ingredients, especially for most of the vegetable soups like Tomato and Egg Soup and Tofu Soup. Prepared ingredients are placed into a wok, along with water and appropriate seasonings when the surface of the water is continually agitated by large bubbles. Dishes cooked by boiling always taste fresh and clear, for it takes a shorter time than braising.

A special cooking method invented in China is steaming. It is widely used for steaming buns and dumplings in northern China, where people live on wheaten food. The process involves placing the ingredients in a steamer basket which is placed over water in a steamer pot. Steamed food contains more nutrition than that of boiled for less nutrition is leached into the water. Very little edible oil and fewer seasonings are used (most Chinese just steam beaten egg only with salt), so the food’s natural flavor is maintained and even enhanced.

Roasting is to cook the food over the open flame of charcoal or in an oven. The moisture of the food is removed whilst seasonings rubbed in from the outside. The outside of the roasted foods always gets drier and browned, but flavors are retained and enhanced. Many ingredients can be roasted, including all kinds of meat along with most root and bulb vegetables. To roast food, the ingredients must be cleaned, seasoned and basted with edible oil in order to reduce the loss of moisture in the ingredients during the roasting process.