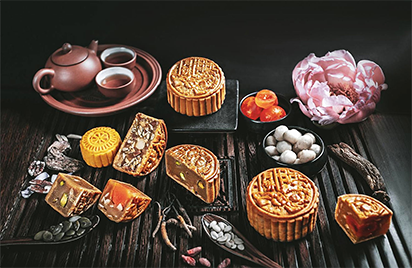 A moon cake is a Chinese bakery product traditionally eaten during the Mid-Autumn Festival (中秋節). The festival is for lunar appreciation and moon watching when mooncakes are regarded as an indispensable delicacy. People share mooncakes between friends or family gatherings while celebrating the festival. The Mid-Autumn Festival is one of the four most important Chinese festivals. 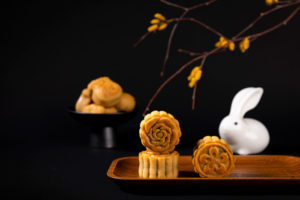 The Tradition of Mid-Autumn Festival 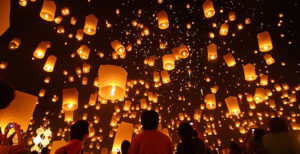 The Chinese have celebrated the harvest during the full autumn moon since the Shang dynasty (c. 1600–1046 BCE). For the Baiyue peoples, the harvest time commemorated the dragon who brought rain for the crops. The celebration as a festival only started to gain popularity during the early Tang dynasty (618–907 CE). One legend explains that Emperor Xuanzong of Tang started to hold formal celebrations in his palace after having explored the Moon-Palace. The term mid-autumn (中秋) first appeared in Rites of Zhou, a written collection of rituals of the Western Zhou dynasty (1046–771 BCE). As for the royal court, it is dedicated to the goddess Taiyinxingjun(太陰星君 Tàiyīn xīng jūn );. And currently still in Taoism and Chinese folk religion.

Empress Dowager Cixi (late 19th century) enjoyed celebrating Mid-Autumn Festival so much that she would spend the period between the thirteenth and seventeenth day of the eighth month staging elaborate rituals.

An important part of the festival celebration is moon worship. The ancient Chinese believed in rejuvenation being associated with the moon and water, and connected this concept to the menstruation of women, calling it “monthly water.” The Zhuang people, for example, have an ancient fable saying the sun and moon are a couple, and the stars are their children, and when the moon is pregnant, it becomes round and then becomes crescent after giving birth to a child. These beliefs made it popular among women to worship and give offerings to the moon this evening. In some areas of China, there are still customs in which “men do not worship the moon, and the women do not offer sacrifices to the kitchen gods.”

Offerings are also made to a more well-known lunar deity, Chang’e, known as the Moon Goddess of Immortality. The myths associated with Chang’e explain the origin of moon worship during this day.

One version of the story is as follows, as described in Lihui Yang’s Handbook of Chinese Mythology:

In the ancient past, there was a hero named Hou Yi, who was excellent at archery. His wife was Chang’e. One year, the ten suns rose in the sky together, causing great disaster to the people. Yi shot down nine of the suns and left only one to provide light. An immortal admired Yi and sent him the elixir of immortality. Yi did not want to leave Chang’e and be immortal without her, so he let Chang’e keep the elixir. However, Peng Meng, one of his apprentices, knew this secret.

So, on the fifteenth of August in the lunar calendar, when Yi went hunting, Peng Meng broke into Yi’s house and forced Chang’e to give the elixir to him. Chang’e refused to do so. Instead, she swallowed it and flew into the sky. Since she loved her husband and hoped to live nearby, she chose the moon for her residence. When Yi came back and learned what had happened, he felt so sad that he displayed the fruits and cakes Chang’e liked in the yard and gave sacrifices to his wife. People soon learned about these activities, and since they also were sympathetic to Chang’e they participated in these sacrifices with Yi.

Handbook of Chinese Mythology also describes an alternate common version of the myth:

After the hero Houyi shot down nine of the ten suns, he was pronounced king by the thankful people. However, he soon became a conceited and tyrannical ruler. To live long without death, he asked for the elixir from Xiwangmu. But his wife, Chang’e, stole it on the fifteenth of August because she did not want the cruel king to live long and hurt more people. She took the magic potion to prevent her husband from becoming immortal. Houyi was so angry when discovered that Chang’e took the elixir, he shot at his wife as she flew toward the moon, though he missed. Chang’e fled to the moon and became the spirit of the moon. Houyi died soon because he was overcome with great anger. After that, people offer a sacrifice to Chang’e on every lunar fifteenth of August to commemorate Chang’e’s action. 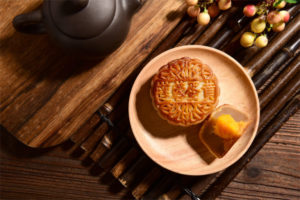 Many types of fillings can be found in traditional mooncakes according to the region’s culture:

Considered by some to be the original and most luxurious mooncake filling, lotus paste filling is found in all types of mooncakes. White lotus paste commands an even higher premium. Due to the high price of lotus paste, white kidney bean paste is sometimes used as a filler.

A number of pastes are common fillings found in Chinese desserts. Although red bean paste, made from azuki beans, is the most common worldwide, there are regional and original preferences for bean paste made from mung beans, as well as black beans.

Jujube mooncakes are made from the ripe fruits of the jujube (date) plant. The paste is dark red in color, a little fruity/smoky in flavor, and slightly sour in taste. Depending on the quality of the paste, the jujube paste may be confused with red bean paste, which is sometimes used as a filler.

A filling consisting of 5 types of nuts and seeds, coarsely chopped, is held together with maltose syrup. Recipes differ from region to region, but commonly used nuts and seeds include walnuts, pumpkin seeds, watermelon seeds, peanuts, sesame seeds, or almonds. In addition, the mixture will usually contain candied winter melon, Jinhua ham, or pieces of rock sugar as an additional flavoring.

Over 3000 years, people in China keep their traditions and eat mooncakes during Mid-Autumn Festivals. Meanwhile, food companies developed new production methods and skills for mooncakes to attract customers as it is the mainstream snack food for celebrating the Mid-Autumn Festival. In China, every several years, we will see new flavors and new styles popping up on the market. People adding creativity and new ideas every year, and revolutionized the making of mooncakes. 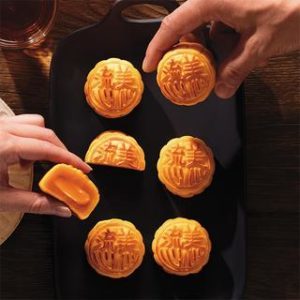 At Fresh International Market, we are offering a wide range of varieties of mooncakes.

From traditional to modern styles, mooncake lovers will find their go-to places for mooncake shopping. Moreover, We offer a price guarantee! Our price will always be lower than in online grocery stores like Yamibuy. Why shop mooncakes with us? Well, we are a local business; we support our community at an honest price. Plus you can get them right now!

Treat your family and friends with a box of sweet and lovely mooncakes, and remind yourself to be thankful and remember those who have helped!

Check how to make mooncakes >>>